On a recent trip to Europe on my 2003 Chrysler Grand Voyager CRD the passenger side low beam headlight stopped working. I quick stop at the gas station to change the bulb didn’t work either. 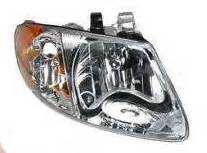 The day after I got home I took the light out and checked for power at the connector. The low beam connector didn’t have the positive side of the power to it.

These cars supposed to have relays and all sort of unnecessary electronic gadgets which I don’t care for and instead of finding an unnecessary defective relay or some other who knows what part, I chose a simple but working solution, instead of spending hundreds for parts I don’t need.

The light bulbs on most cars need 12 volts to work. (some cars have 24 volts system and some has 6 volts system)  It doesn’t matter if it gets it straight from the battery or from a relay module or from a power module or from where ever. All it matters that it gets 12 volts when I turn on the switch.

Now when I turn on the switch the low beam on both sides works fine.
Can’t use the parking light, because now it is connected with the low beam, but I’ve never used parking lights anyway and I have no idea why are they there to start with as they are small and has such a low light output that it is hard to see them in just about any circumstances.

We all know how much pain car wiring is and to find anything if it fails. The basics never change and it’s logical the bulb works with electricity. As long as it gets it it will work (unless it’s burned out). Even if you just hook it up to the battery and install a toggle switch in the line it will work as it should. Why spend hundreds for a part that is there for no other reason than to increase the price of the car at the dealer. The basics are basics and not much else is more basic than powering a light bulb.