How to fix a car blower fan when only works on high speed? There is a thermal fuse in the blower duct and if you replace that, it’ll work like the way it should be. No need to replace the whole unit for astronomical prices from the dealer, when the part you need only cost about a Dollar on Ebay, yet the dealer would charge you at least a hundred times that much, plus labor. On my car it takes less than 30 minutes from start to finish to fix it.

I have a Chrysler  Voyager (Town and Country in the USA I think) and had the same problem with the blower blowing only on high speed. As far as I know, all the other cars operate with the same system.

In the Voyager when you tilt the glove box out, (on each end of the box there is a rubber pad and you have to push those back to tilt the box out and just let it hang by it’s hinges, or just use a screw driver to pry it away) right there in front of you you’ll see some wires plugged into a connector that is screwed into the duct.

Unplug the wires and take out the screws holding it. (the white plastic) This is what you’ll see. 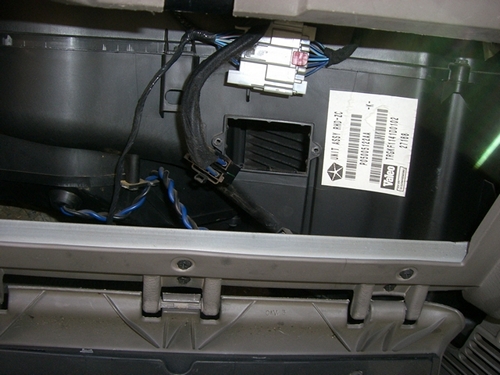 and this is what the blower speed control looks like 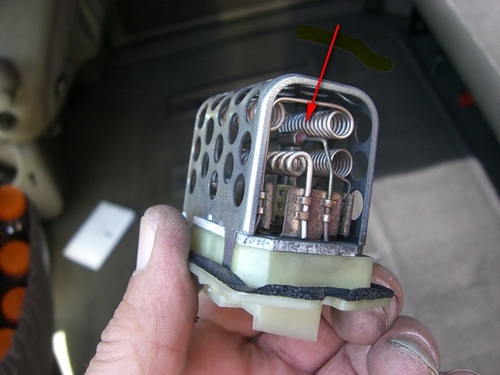 Where the red arrow points to, that is the thermal fuse you have to replace. It looks like a resistor but operates on 128 degrees Celsius. It’s easier to work on it if you pry the metal shroud off, but not necessary. You can just cut the fuses’s legs  with a side cutter and solder a new piece onto the stubs. The 128 Celsius thermal fuse only cost about a dollar on Ebay.

This is what the 128 Celsius thermal fuse looks like. You don’t need to use the two barrel things on the ends. 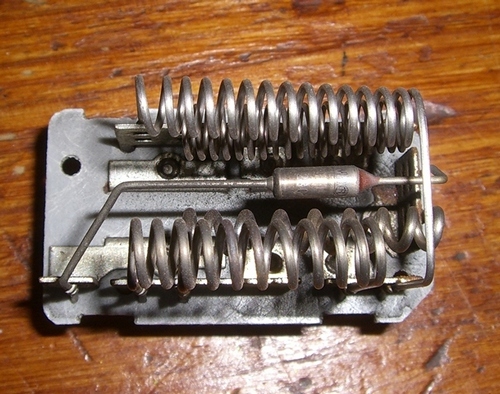 This is what it looks like in the blower speed control module. Just cut the two ends off with a cutter. Make sure you need enough length to solder the new thermal fuse onto it. 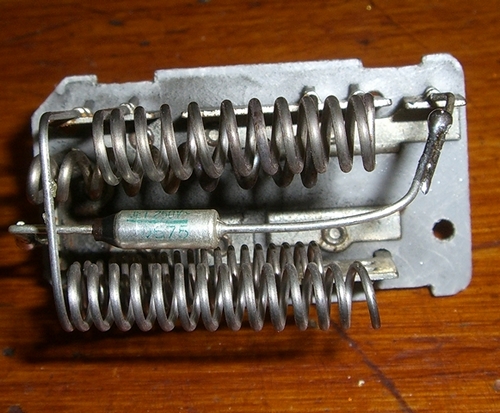 Here is the new thermal fuse soldered in. Now all you have to do is just put it back in to the hole in the duct and connect the wire harness. The fan should work like used to.