My Chrysler Voyager 2001 CRD diesel was smoking under the hood just when I was saying good bye to my mom before leaving on a long, cross Europe trip. You can imagine my heart thumping when I saw this thick blue smoke rising from under.

Quickly opened the hood to see what had happened and saw the smoke rising somewhere from around one of the belts. There are two belts on my Voyager. One is a serpentine belt and one separate for the power steering pump. The serpentine belt was smoking really bad. This belt drives the high pressure diesel pump, the water pump, the AC compressor.

The outside temperature was somewhere around 32 Fahrenheit so the AC was not operating at the time, but the smoke seemed like coming from the compressor area. I’ve turned on the AC to see if it helps and the smoke stopped.

Turned it off and the smoke started again. Since I had no time to waste, I’ve left the AC compressor running and started my 1300 mile trip. After driving for about 130 miles like that, I heard this clunking noise from under the hood and when I have pulled over to check, I saw that the clutch plate (the center part of the compressor sort of like a metal plate there) is loosed.

I guess the bolt or nut that was holding it there somehow got loosed and fell out. I’ve turned the AC compressor off and the noise stopped. I had no choice but to keep on driving, but there was no more incident after that.

The belt runs on several pulleys and one of them is the AC compressor’s. That pulley is a free running disc if you will, and the belt turns it. When the compressor is engaged, the AC clutch (that plate that is loosed) is pulled tight onto the pulley by an electric magnet starting the compressor.

The compressor seized (from lack of use I guess) and the belt started to slip on the AC pulley, creating smoke. Once the clutch part fell apart the resistance stopped and the pulley was running freely again, the way it should when the AC is not turned on. 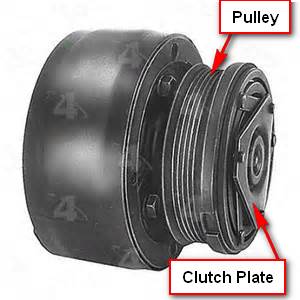 Here in the UK where I live the weather isn’t that hot in the summer so I am not bothered by the compressor that much, and I think once the compressor is taken out the parts can be put back in. The clutch plate is still there because the side wall of the chassis is so close it couldn’t fall out.

The belt regardless of the smoking is still good and usable and I drove 1300 miles with it so I assume it is still good, but just as a precaution I am going to change it when I get a chance.