When I stopped at a place with my Renault Master van there was no trouble at all. When I was leaving a few minutes later I’ve started the engine put it in 1st gear rolled out to the road from the driveway and after  looking left and right to see any oncoming traffic gave it some gas and the van wouldn’t move. I’ve looked at the dashboard and it was in N neutral. Tried to put it in gear and would not go. Had to tow the darn thing home at the cost of 310 pounds. 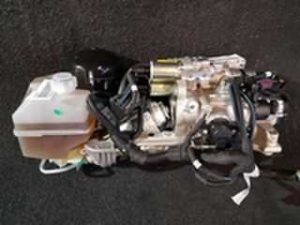 Talked to several mechanics, but they had no idea what could it be, drove down to the dealer and they were talking about this and that only made sense to make money off of me

Than my other van needed a clutch and I was telling the mechanic what had happened with the Renault tecshift and he said “I know what it is, clutch slave cylinder). I had him take it a apart and sure enough, the clutch slave cylinder was leaking. He changed it and that was it. The van is back as new and running fine.

He said the tecshift very very rarely goes bad, most of the time it’s something with the clutch. Could be the gearbox too with some high mileage vehicle, but most unlikely if the vehicle has normal mileage and maintained.

I change the gear oil every 30 thousands miles in my vehicles, because that’s about the life span of the gear oil before it starts losing viscosity. The car manual might say lifetime oil, but that’s the lifetime of the oil and not the lifetime of the car. The gearbox oil needs to be changed every 30-40 thousands miles in order for it to work good for a long time. If it’s an automatic gearbox the filter needs to be changed along wit the oil too. Manual gearbox don’t have filter so you just drain the oil and fill it back up to the level it was. Measure how much came out and put the same amount back in. Easy as pie.